Robbery at the palace

A few weeks before the opening of the exhibition, a crime was committed. Da Vinci's extraordinary work of art was stolen from the Artaza Palace where it had been placed for its upcoming exhibition. 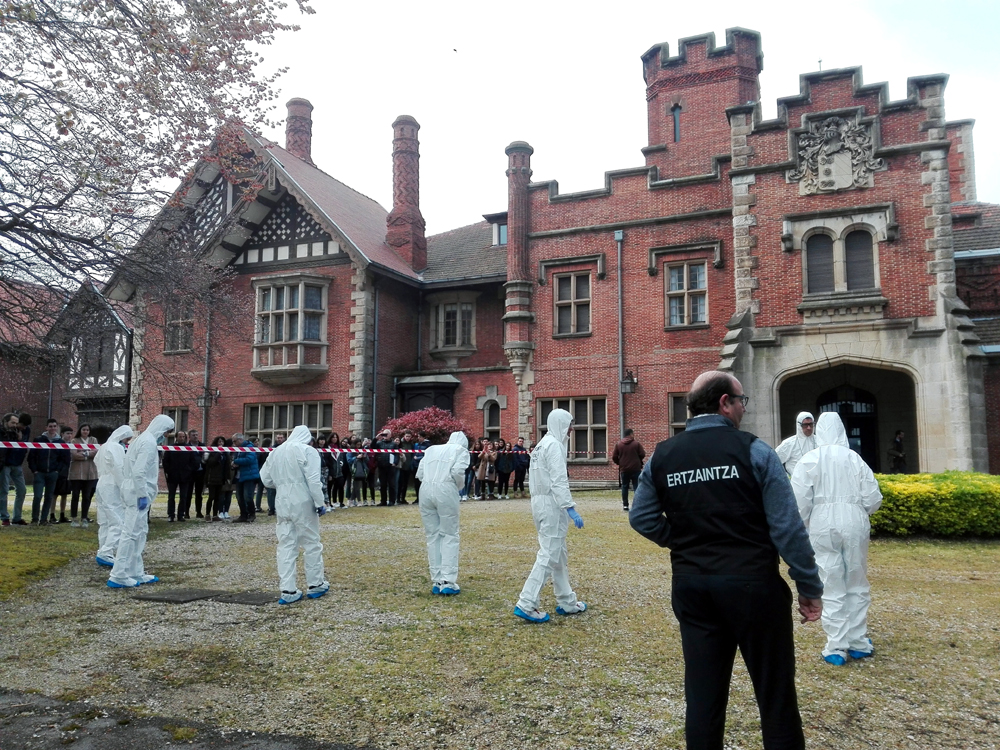 A witness saw two people jump over the fence that surrounds the main entrance. Unfortunately they were unable to give a clear description as it all happened so fast.  The only thing they can be sure of is that the person seen was carrying a bag in their hands.  On approaching the palace the witness noticed that the main door was open and called the police.

A few minutes later a patrol car arrived with two police officers. Taking charge of the situation they decided to cordon off the area and informed their superiors.

Quickly the information was relayed to the Police who were on patrol nearby. Police officers were able to identify a man with a bag in the gardens surrounding the palace. When asked to open the bag, a sweater, a pair of shoes, some documents and the stolen painting were discovered.

The police officers listened to his explanation, however, not considering it true and due to the seriousness of the crime they proceeded to arrest the suspect, reading his rights and informing him that he had the right to be present at the scene of the crime while it was inspected. The detainee expresses his desire to be present for the inspection without the presence of a lawyer, complying with article 333 of the Criminal Procedure Law.

The detainee has a record of burglary (Record Number: 393448) , but told the agents that he had found the bag and that he knew nothing of its contents. Prior to the transfer to the crime scene, a preventative search was made of the detainee and his belongings were taken, among which a clock with a broken plastic wrist strap was found.  When asked by the agents of its origin he stated that it belonged to him.

The forensic science unit were informed and made their way to the crime scene where they were to perform an inspection, reconstruct the criminal act, protect and preserve the area, as well as collect evidence and document their findings.

Throughout the year 2019, multiple exhibitions have been organized to mark the fifth centenary of the death of Leonardo Da Vinci. The Florentine genius of the Renaissance died in May 1519 in the French city Amboise, in the Loire Valley. His dexterity with the brush has left such an impression that 500 years later we still remember the day that the painter, sculptor, architect, engineer, musician, inventor and anatomist stopped enlightening us with his creativity.

On the occasion of the fifth centenary of the artist's death, the family that owns the painting wants to take it out of the safe at the Swiss bank and make it known. By express wish of the owner it has been placed in the Artaza Palace. This decision has surprised everyone, but it is not surprising if we delve into the history of the Palace and the friendship cultivated by the former tenants and the German family who owns the mysterious painting.
It is a painting attributed to the master and practically unknown in the world. The painting has gone through countless illustrious hands until in 1921 it reached the hands of a German industrial family. Then it disappeared again like a ghost and only a few sets of eyes have had the opportunity to see the painting. It is named "Lady with Stole"(Ritratto di Dama con Pelliccia), a little painting in a golden frame depicting a young woman smiling while wrapped in a cloak and a leather stole, hence the name of the painting.
For reasons unknown to us the Artaza Palace has a special value to the family. There are many speculations on the subject but none have been proven.

The main exhibitions organized for this anniversary take place in Paris, London, Edinburgh, Rome and Milan where almost all of his work is preserved. However, the story is full of surprises and the magic that surrounds the fifth centenary of the death of the artist has brought to light a painting which has never been seen before. It is named "Lady with Stole", a little painting representing a young woman wrapped in a cloak with a leather stole with a smile.

According to the plans that the architect Manuel María de Smith Ybarra (1879-1956) designed for the industrialist Victor Chávarri Anduiza, Marqués de Triano, building of the Artaza Palace started in 1914. It was officially inaugurated in 1918, the year in which Alfonso XIII visited it. During the Civil War, the palace was used as a as barracks by battalions of gudaris (Basque soldiers). Subsequently, Artaza continued to be the permanent residence of the Chávarri family and summer home for their descendants. For many years, they received visits from those in politics and high society of that time, who left their signature stamped in the palace book. The Artaza Palace is, without a doubt, Smith's best and most emblematic work, a genuine local interpretation of the English Queen Anne´s style. In 1979, it was abandoned by the Marquesa de Triano, remaining thereafter empty. Finally, in December 1986, this architectural jewel was taken over by the Basque Government, while the Provincial Council of Bizkaia took charge of the gardens, currently in public use.

The Artaza Palace is located in the centre of the Artaza public park, bounded by the BI-637 road and Txikia and Eusko Gudariak avenue.  There are various ways to access the park as it is not fenced. The Palace is located at the top of the hill and is inside a fenced enclosure with two entrances. The main entrance leads to a road that leads onto the BI-637 road and the service entrance leads to another road that goes to Eusko Gudariak Avenue.  At the main entrance to the park there is a cafeteria. Within the fenced enclosure in which the palace is located there are gardens and sculptures.

Search and location of evidence 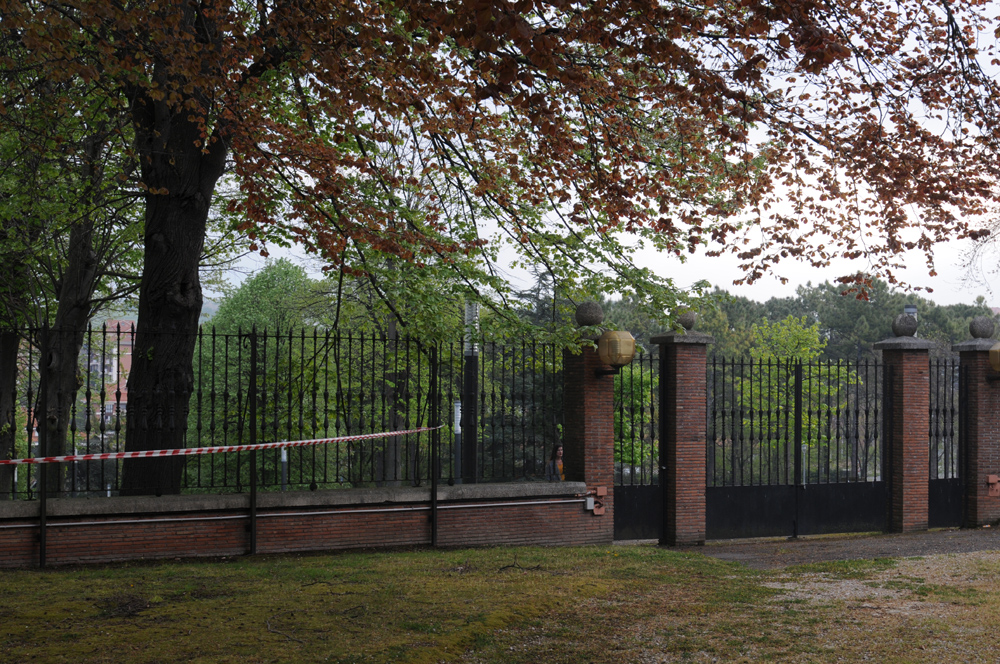 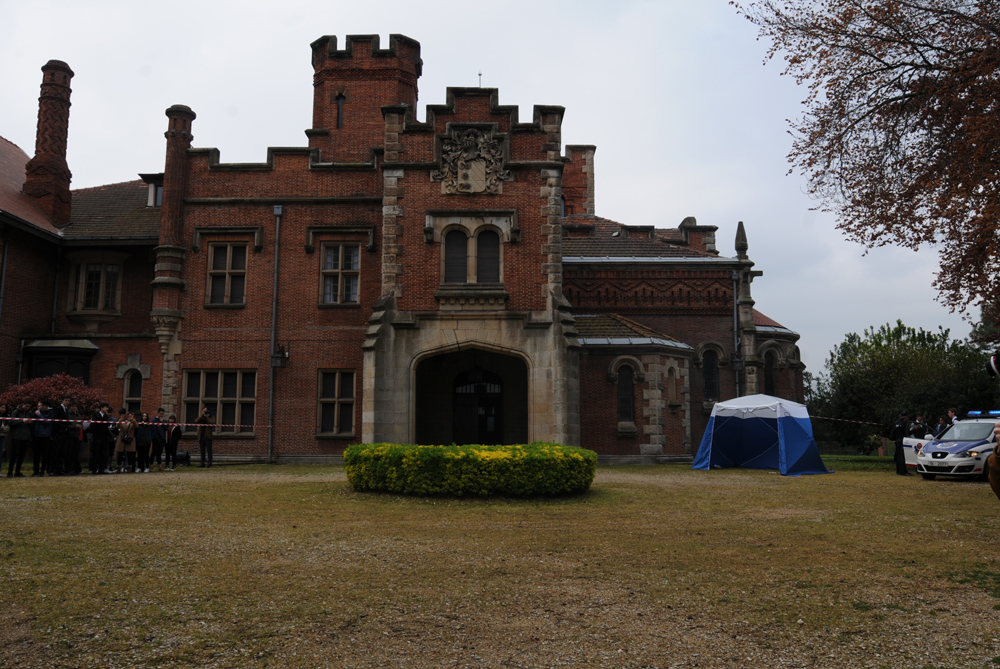 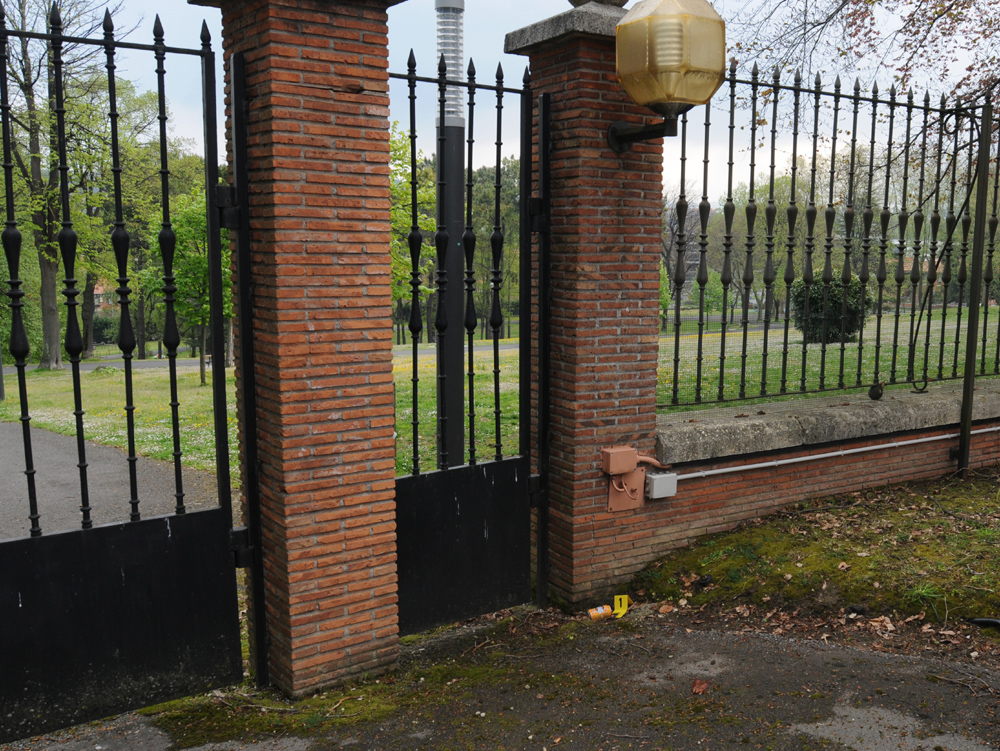 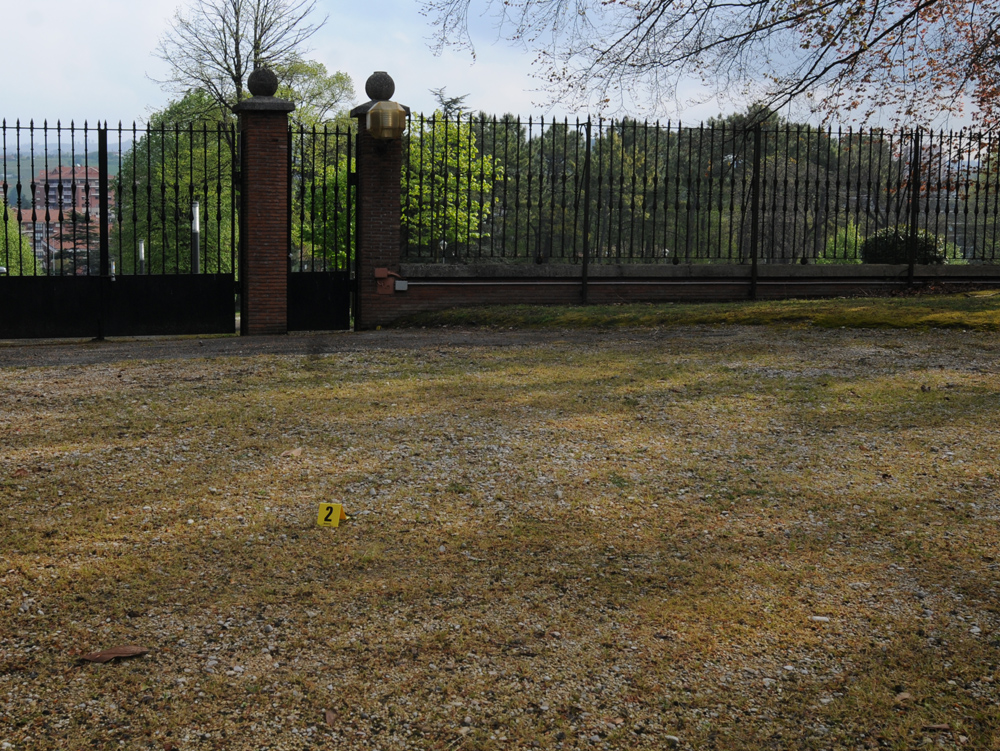 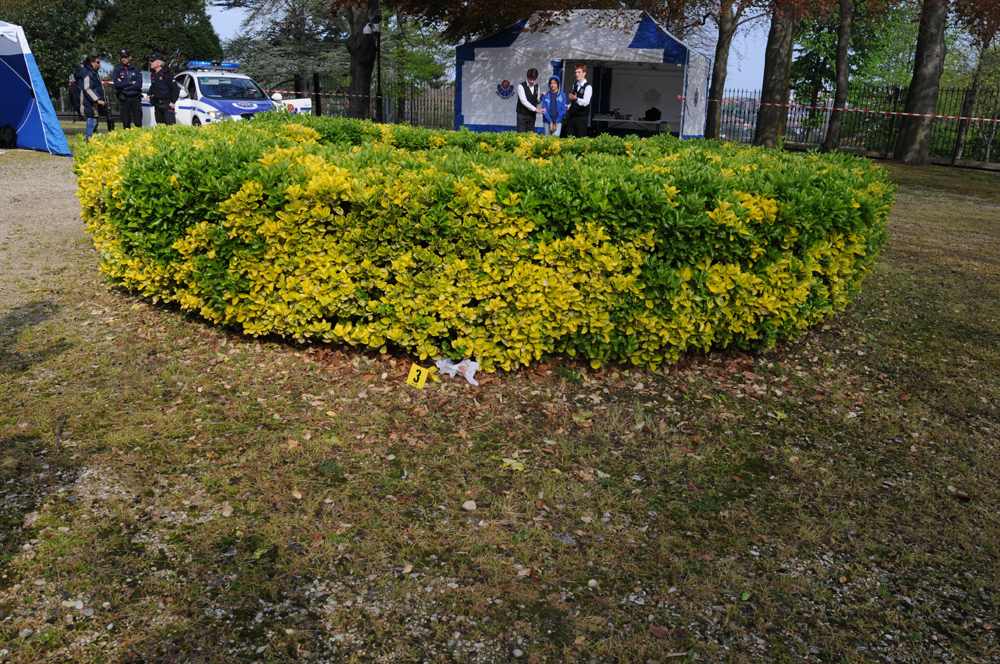 Inside the building the first room provides access, through a metal and glass door, to a second larger one that acts as the main hall of the palace. A piece of fiber was found on the door and a fingerprint on the glass. They are 1.5 meters from the ground and 21 centimeters to the left of the door frame. In the second room, which corresponds to the main hall of the palace, there are two different footprints. This information, along with what the witness has revealed, confirms that the robbery has been committed by two people. The tracks are 4.03 and 3.77 meters away from the entrance and 1.8 and 1.77 meters away from the wall where the table is located on which some hairs have been found. The table is 75 centimeters high, 152 centimeters long and 62 centimeters wide. 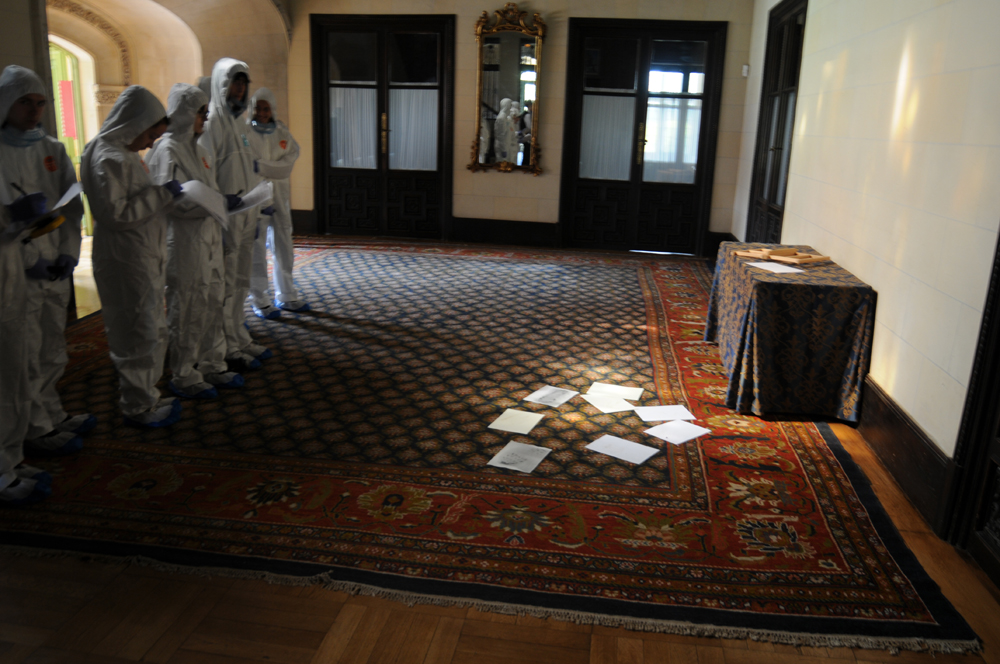 Finally, with the use of luminol, evidence of blood is discovered on the floor and on the inner part of the main door to the palace, 1.34 centimeters high.

A drawing of the scene of the crime is made and the following minutes are terminated at 1:17 pm on April 12, 2019

On April 15th, 2019, the evidence is sent to the scientific police for analysis.

Map of the crime scene